Falling in Love With Milwaukee, Virtually

Northwestern Mutual's tech team is primarily based in Milwaukee. After I was offered a virtual summer tech internship at the company, I wondered, “What's in Milwaukee?”

In my first week, I found out I was one of nearly 200 Summer 2021 interns, 60 percent of whom are in tech. Learning about all the different pathways available to computer science majors has been so fascinating. I have met interns working in cybersecurity, program management, analytics and countless other areas. I was truly surprised to find out the extensive number of roles for tech professionals at Northwestern Mutual.

I also never would have guessed about the plethora of opportunities the city of Milwaukee could offer me. As a Maryland-based computer science major, when considering a "tech city" to move to after college, I only ever thought of the usual suspects – San Francisco, New York and Washington, D.C. In my short time as a virtual tech intern at Northwestern Mutual, I have been exposed to the growing tech hub of Milwaukee.

One of the most informative experiences I participated in was the Milwaukee Tech Trail, hosted by Northwestern Mutual and NEWaukee. The event connected me with changemakers who are making waves in the Milwaukee tech and cultural scenes. A few of the speakers were:

What I found most interesting about the event was hearing how people are changing the culture of Milwaukee. Alexa Alfaro, founder of Tatay’s Truck, a Filipino cuisine food truck, talked to the tech interns about all the work she has done to help diversify the local food scene. Describing Milwaukee seven years ago as “the land of steak and potatoes,” Alfaro explained the process of introducing ethnic food to the city and what it has been like seeing Milwaukee grow into a more diverse food culture. When speaking with other interns, one described Milwaukee as “a city of foodies.”

There is more to Milwaukee’s culture than just food. Tarik Moody is influencing the city’s media and culture through 88Nine Radio Milwaukee. He shared the changes he is making and witnessing in the local culture, including his podcast, Diverse Disruptors. In the podcast, Moody interviews innovators in tech and beyond about the work they are doing to diversify and make change in their respective arenas.

So back to my original question: “What’s in Milwaukee?”

And arguably most importantly, hopefully my tech future. 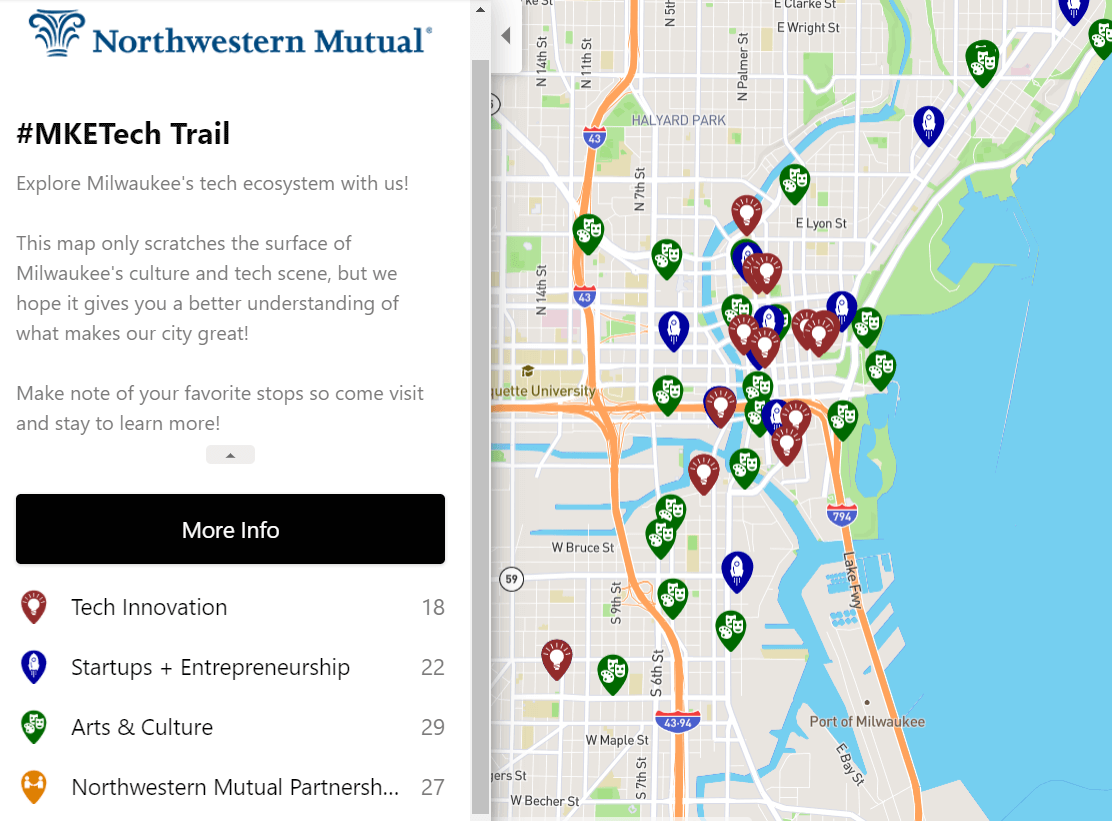 STEM Outreach App Helps Position Northwestern Mutual as a Tech Destination at THAT Conference
Five Reasons You Should Join the Milwaukee Product Brew Meetup
Northwestern Mutual Recognized by Celent as a Winner of the Model Insurer Award for Innovation and Emerging Technologies
View All Articles
Tech CareersNM.com